Can you recall the heady intoxicating sensation of love’s first beginning? The terrifying lows of separation’s abyss? Join us on love’s epic journey throughout the human condition. Featuring such romantic masterworks as Intermezzo from Cavalleria Rusticana, Barcarolle from Tales of Hoffman, and more!

Join us on October 27 as we return to the Chilliwack Cultural Centre’s HUB International Theatre for a Hallowe’en Symphony Spooktacular. There’s something for everybody, from Chopin’s Funeral March, to Grieg’s classic In The Hall of The Mountain King, to Han’s Zimmer’s Dark Knight.

Come dressed up in your favourite costume! 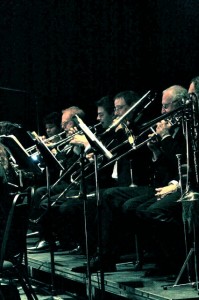 The CMO is dedicated to performing quality Classical music in our local community of Chilliwack, B.C. We strive to provide our outstanding patrons with the very best in programming, and we endeavour to make each and every concert unique and inspirational. Our goals include having a fun time making wonderful music, and fostering a love and appreciation for the arts and especially music.

Our rehearsals our held weekly on Wednesday evenings.

We are generally open to any orchestral instruments, but we especially have need of players of the following instruments:

If you are interested in joining the CMO, we encourage you to connect with us via email at 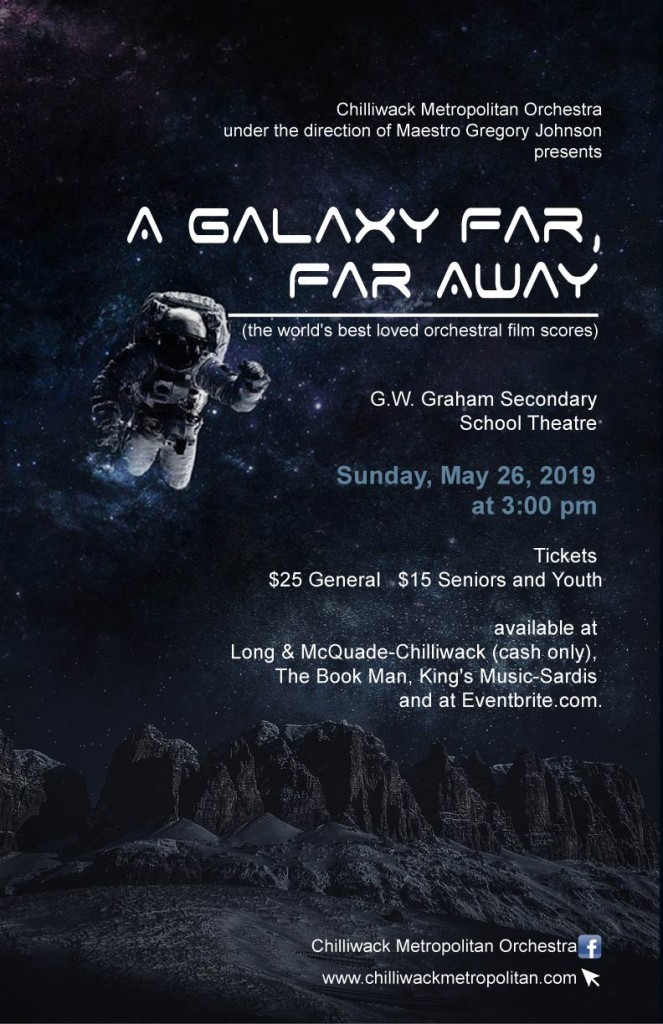 Who amongst us hasn’t been whisked away by the delights of John Williams’ music? The preeminent movie composer of our time has been active in composing for over six decades. In our 11th season finale, get whisked away into another land with some of the most iconic movie music of all time, including:

We are pleased to announce the soloists for our Inaugural Rising Stars Concert! A solo competition was held by the CMO and judged by Maestro Gregory Johnson, in which several young competitors auditioned their pieces for a chance to perform with the CMO at our Rising Stars Concert on Sunday, Mar. 31. These four young musicians are the ones who made the cut, and we could hardly be any more excited to announce them to you!

You can get tickets from Eventbrite.com to see these wonderful young soloists!

Jonah is a grade 5 student at Unsworth Elementary School in Chilliwack. He has been taking violin lessons from Karin Fehlauer for 5 1/2 years. He has won several awards and accolades at the Lions Club Music and Dance Festival, including being named Chilliwack’s representative to the Provincial Music Festival in violin in 2018. Jonah participated in the 2018 UBC Strings Camp, where he actually was asked to play Viola for their Gala Concert. He not only learned the larger stringed instrument and how to read alto clef in a matter of four days, but he also still played violin in the Gala Concert. To read his full bio, head over to our Facebook page here.

Jonah is a fabulous musician who we can’t wait to perform with! He will be playing Vivaldi’s Violin Concerto in G Minor, accompanied by the CMO’s string section as well as continuo harpsichord. 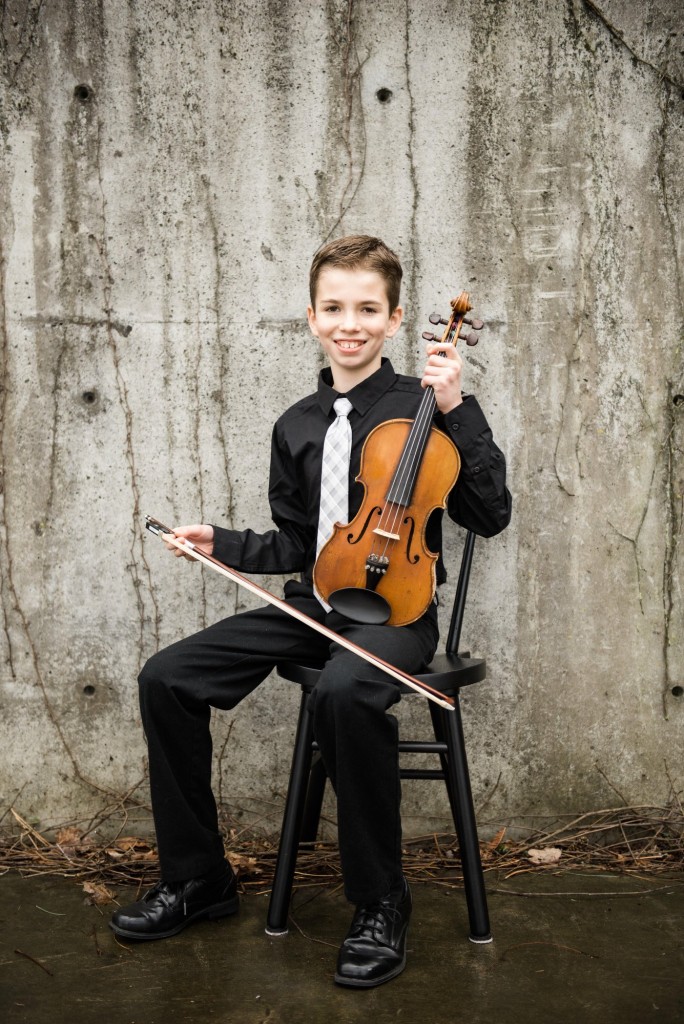 Our next soloist… Well, you could say that he has a little bit of experience with the CMO. Actually, he is our regular Bass Trombone player. He has some serious skill on this instrument, and now he will have his chance at his own solo appearance with the CMO.

A little information about Jackson:

Jackson Howard began his musical studies at the age of three, starting piano at 5 and trombone at 13 years. He studies piano with Nita Pelletier, and completed his RCM Grade 10 with First Class Honours this past summer (2018). His trombone studies have been with Ellen Marple, Brian Wendel and have also been frequent with Gordon Cherry. In 2018, Jackson earned the Top Intermediate Brass award at the Performing Arts BC Festival, and he was selected for the BCMEA Honour Concert Band as well as the Denis Wick Canadian Wind Orchestra. Jackson is a member of the Chilliwack Metropolitan Orchestra and the Vancouver Youth Symphony Orchestra. His bio is also available on our Facebook page here.

Jackson will be performing Concertino for Trombone by Ferdinand David. 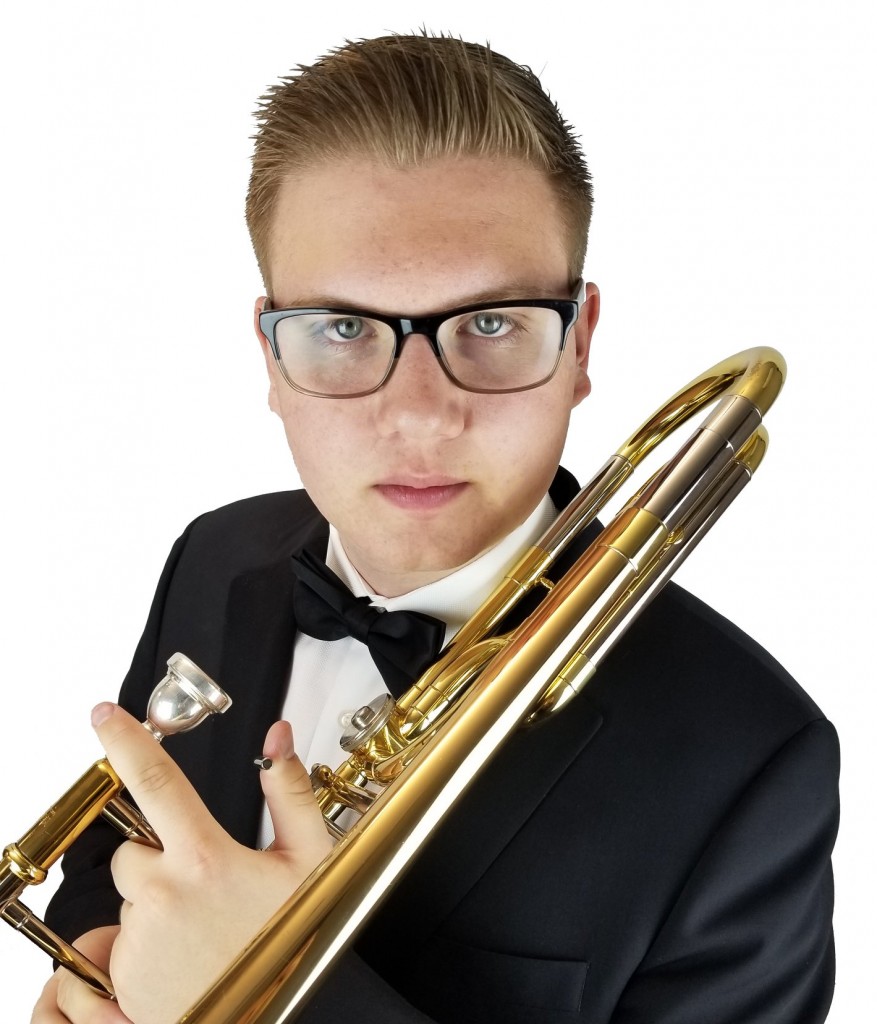 Next up, we have Sarah Anderson-Caulfield. Sarah is a very accomplished opera singer, and we’re very excited to have her perform with the CMO. Here’s a little bit about Sarah:

Sarah Anderson-Caulfield is currently pursuing her Bachelor’s in Opera under the tutelage of Rhoslyn Jones. In addition to debuting with the CMO, she will also be debuting with UBC opera in 2019. She has performed with the Vancouver Symphony Orchestra and the Chilliwack Symphony Orchestra And Chorus, as well as at Kwantlen Polytechnic University. As a part of the trio Erdenlied (with Andrea Pedro on piano and Benjamin MacRae on clarinet), she won the Senior Canadian Chamber category at the 2017 BC Provincial music festival. She is a recipient of multiple scholarships from the Faculties of Music at UBC as well as KPU, including the Jill and Mike Yonchak Scholarship. Her full bio is available on our Facebook page here.

It’s almost needless to say, but Sarah is a fabulous musician who is sure to impress! She will be performing “Je marche sur tous les chemins,” an aria from the opera Manon, composed by Jules Massenet. 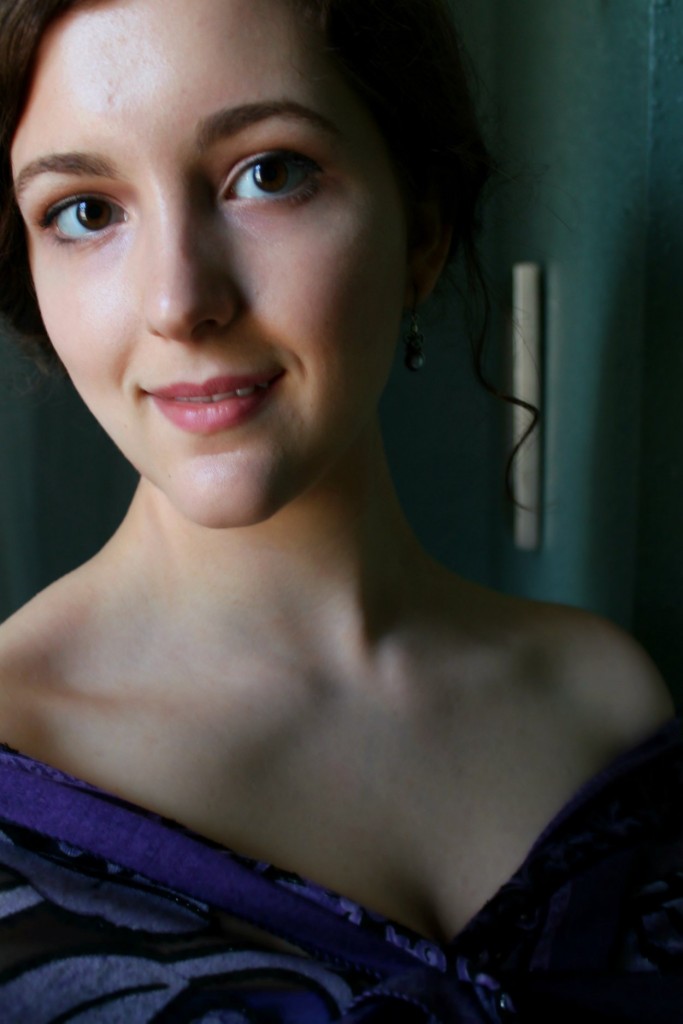 Finally, but certainly not least, we have our very own concertmaster, Solchan Kim, performing as a violin soloist with the CMO. There’s a very good reason for this, as you will witness at the Rising Stars Concert. Solchan is very accomplished on the violin, and we’re very excited to have him perform solo with us.

A bit of background on Solchan:

Solchan Kim is 17 years old and studies violin with Taras Gabora. He took violin lessons from the age of 9 with Karin Fehlauer until recently when he changed teachers to Mr. Gabora. In addition to the violin, Solchan also plays trombone, piano, drums and banjo in various music groups such as his school’s jazz band, concert band, and Dixieland band. He has won numerous awards from the Chilliwack Lions Club Music and Dance Festival and the Performing Arts BC Provincial Music and Dance Festival. Solchan has vast experience playing in many different musical settings, such as musicals, jazz bands, concert bands, and string quartets. His full bio is also located on our Facebook page here.

We are very excited to give Solchan this opportunity to perform solo with the CMO, and we are looking forward to him performing the 1st Movement of Symphonie Espagnole by Édouard Lalo. 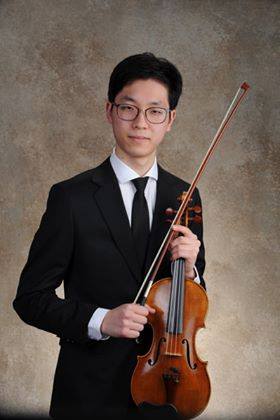 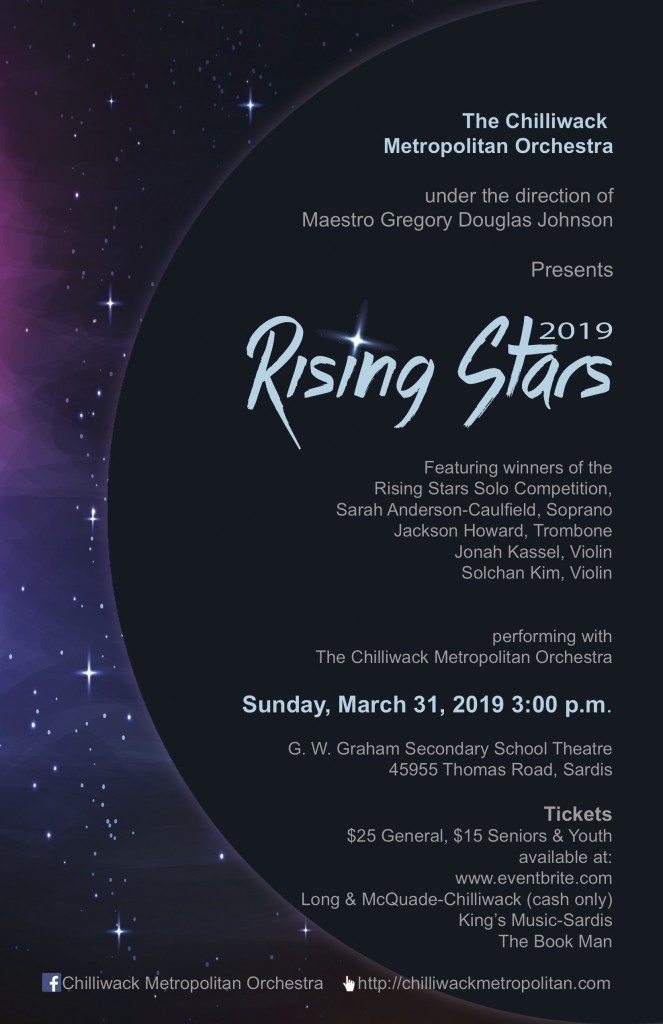 Join us on March 31 for a concert packed with young talent, as we present the winners of the CMO’s inaugural Rising Stars competition. Sarah Anderson-Caulfield – soprano, Jackson Howard – trombone, Jonah Kassel – violin, and Solchan Kim – violin, will be performing alongside the CMO, with pieces such as Vivaldi’s Violin Concerto in G minor and Lalo’s Symphonie Espagnole. We hope to see you there! 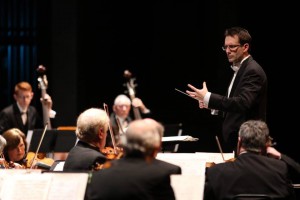 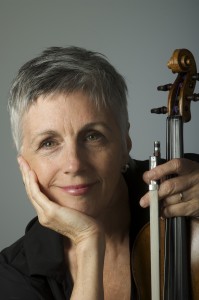 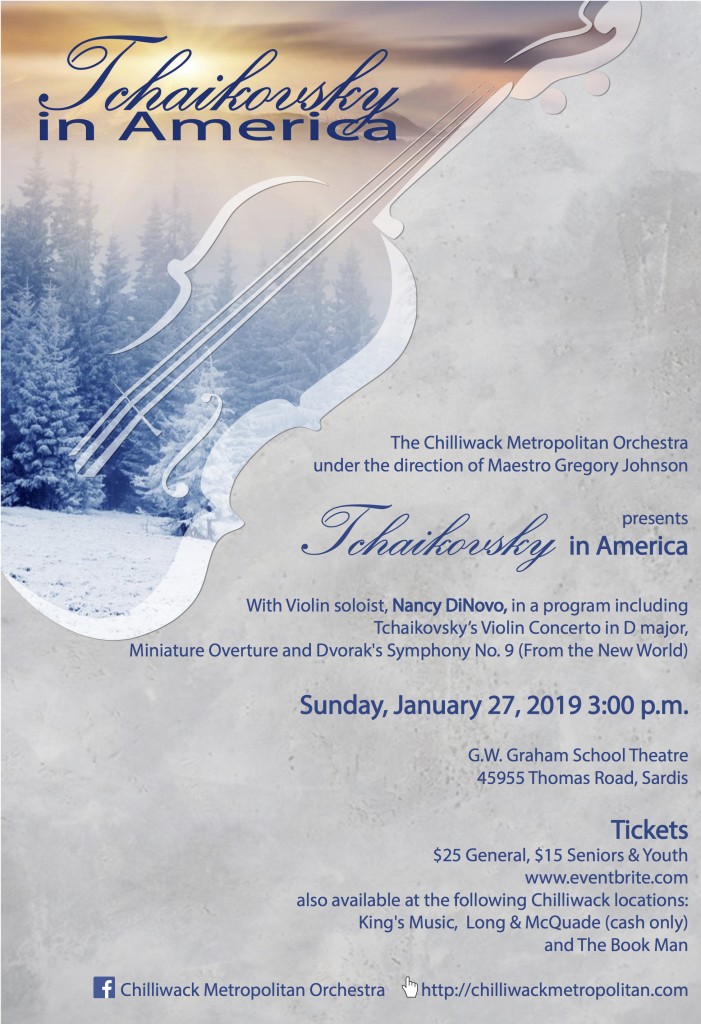 Imagine the glitz, the glamour, the reporters! In the year 1891 Tchaikovsky was one of the most famous composers of the day. Naturally, it was Tchaikovsky who was invited to lead his own works during the opening festival of the Carnegie Hall. Come experience the excitement of the journey to New York with famous works of the great master along with beautiful renditions of American folk songs. Returning to our stage is the hugely popular Nancy DiNovo performing Tchaikovsky’s legendary Violin Concerto in D.

Tickets are on sale at King’s Music, Long & McQuade, and The Book Man, as well as on Eventbrite.com. 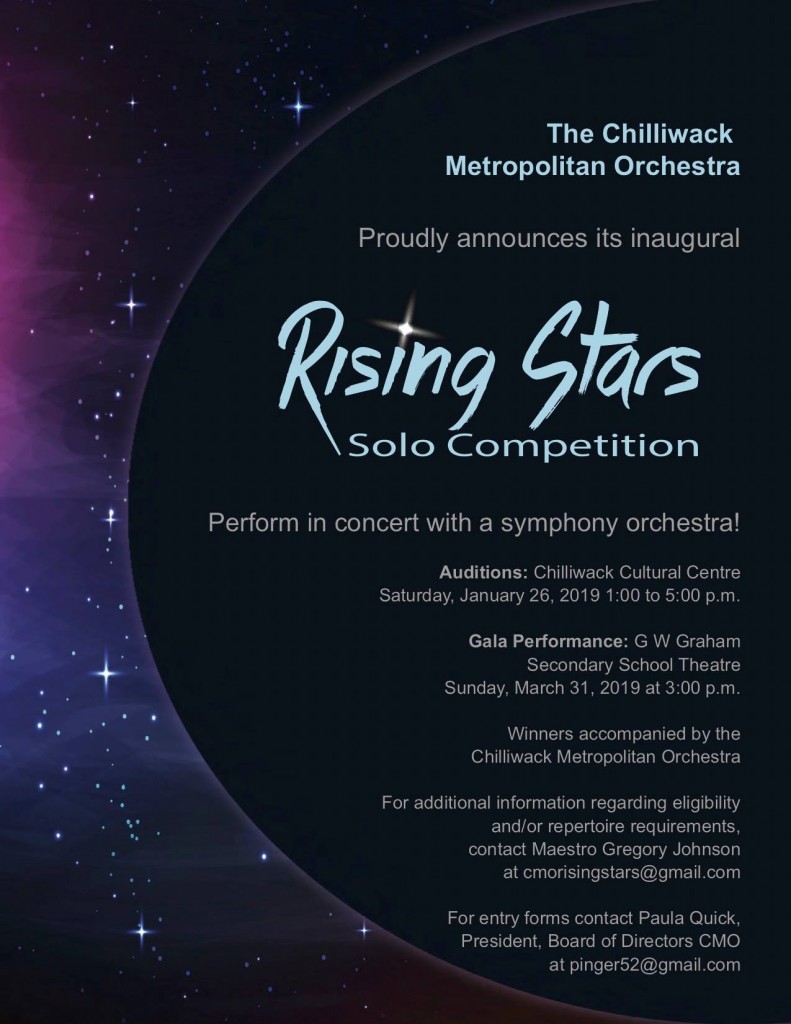 Please note: The deadline for applications has passed.

Join us on March 31, as three young musicians perform with the Chilliwack Metropolitan Orchestra. 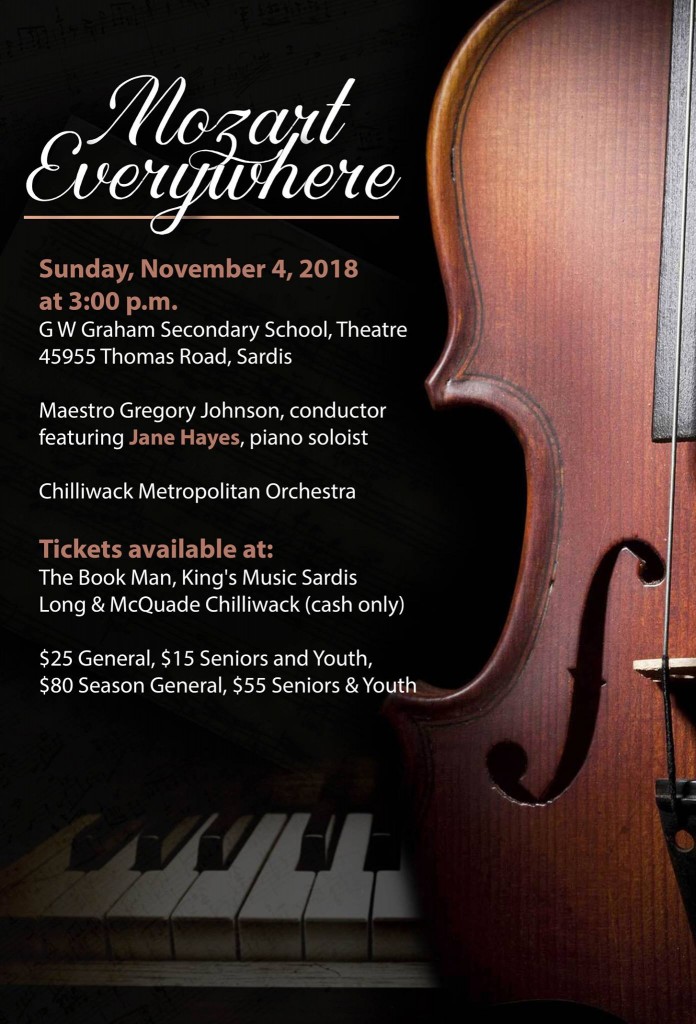 Book your calendars, because this is a concert you won’t want to miss! Join us on Sunday, November 4 for an afternoon of Mozart. We will have pianist Jane Hayes playing Piano Concerto No. 20 in D Minor, in addition to many other classic Mozart pieces. Click “Ticket Sales Information” above to find out where to get tickets. Hope to see you there!